Rockets beat the Placers once again 118-97

Rockets less skilled than usual in the first quarter, are surprised by the Pacers who win 27-22. Not to worry Texans who take the advantage in the middle of the second quarter 42-39 and have 5 points lead at break 54-49 after a 32-22.

The Rockets finish the month of November with 12 wins for a single loss, and are on a run of 6 wins.

Today, the Mayor and City Council honored the Rockets’ Forward for his contributions to the City by proclaiming November 28, 2017, Luc Mbah a Moute Day in Houston.

« WHEREAS, an influential NBA basketball player for the Houston Rockets, Luc Mbah A. Moute is a community servant and leader. He serves as a motivational speaker, sharing his inspirational story to help people overcome life challenges and follow their dreams; and,

WHEREAS, a few years ago, Luc Mbah A. Moute launched the Luc Mbah A. Moute Foundation, a global nonprofit organization dedicated to inspiring children around the world to believe in themselves, and the many possibilities for their future despite life’s trials and tribulations. His organization also helps the youth by contributing to improving issues such as education, health and nutrition; and,

WHEREAS, partnering with established and key organizations, the Luc Mbah A Moute Foundation continues to impact communities and individuals that need assistance, helping thousands obtain medical treatment and school supplies, as well as assisting with various programs; and,

THEREFORE, I, Sylvester Turner, Mayor of the City of Houston, hereby proclaim November 28, 2017, as Luc Mbah A. Moute Day in Houston, Texas. »

I’m humbled and honored for this proclamation from Sylvester Turner, Mayor of Houston and Vice-Mayor Pro-Tem Jerry Davis. The City proclaimed November 28, 2017 as « Luc Mbah A Moute Day » in the City of Houston. Thank you Houston!

I’m humbled and honored for this proclamation from Sylvester Turner, Mayor of Houston and Vice-Mayor Pro-Tem Jerry Davis. The City proclaimed November 28, 2017 as « Luc Mbah A Moute Day » in the City of Houston. Thank you Houston! 🎥: @shotbybishop_

After a complicated first period, the Rockets took the lead after the break to widen the gap until the end of the match. James Harden performs at 37 points, 2 rebounds, 10 assists, Ryan Anderson 17 points, 7 rebounds, Clint Capela 12 points, 15 rebounds, 3 assists, Luc Mbah has Moute 9 points, 5 rebounds.

After the break, the Rockets thread the baskets while the defense limits the Knicks to 13 points. A perfect third quarter 37-13 which offers 21 points lead to the Rockets at the start of the last quarter 95-74. The match rocked for the Rockets who control the end of game 22-28 and win 117-102.

Luc Mbah a Moute signed last night against Denver the best plus / minus ratio of the past 20 years: +57 (Houston outscored Denver by 57 points while on the field). A great performance that adds to the Rockets that exploded the Nuggets 125-95 (75-40 at the break). In addition to his record, Luc Mbah Moute scored 13 points at 100%, 1 pass, 4 rebounds. James Harden added 21 points, 8 rebounds and 9 assists, Chris Paul 23 points, 2 rebounds, 12 assists, Trevor Ariza 25 points, 2 rebounds.

The second period is a formality for Houston which runs 26-27 in the 3rd and 24-28 in the last quarter. The Rockets are 1st in the Western Conference with 14 wins and 4 losses.

Luc Mbah a Moute was +57 for the Rockets tonight, the best plus-minus by any player in a game over the last 20 seasons (including playoffs). pic.twitter.com/JmqUyAil6C 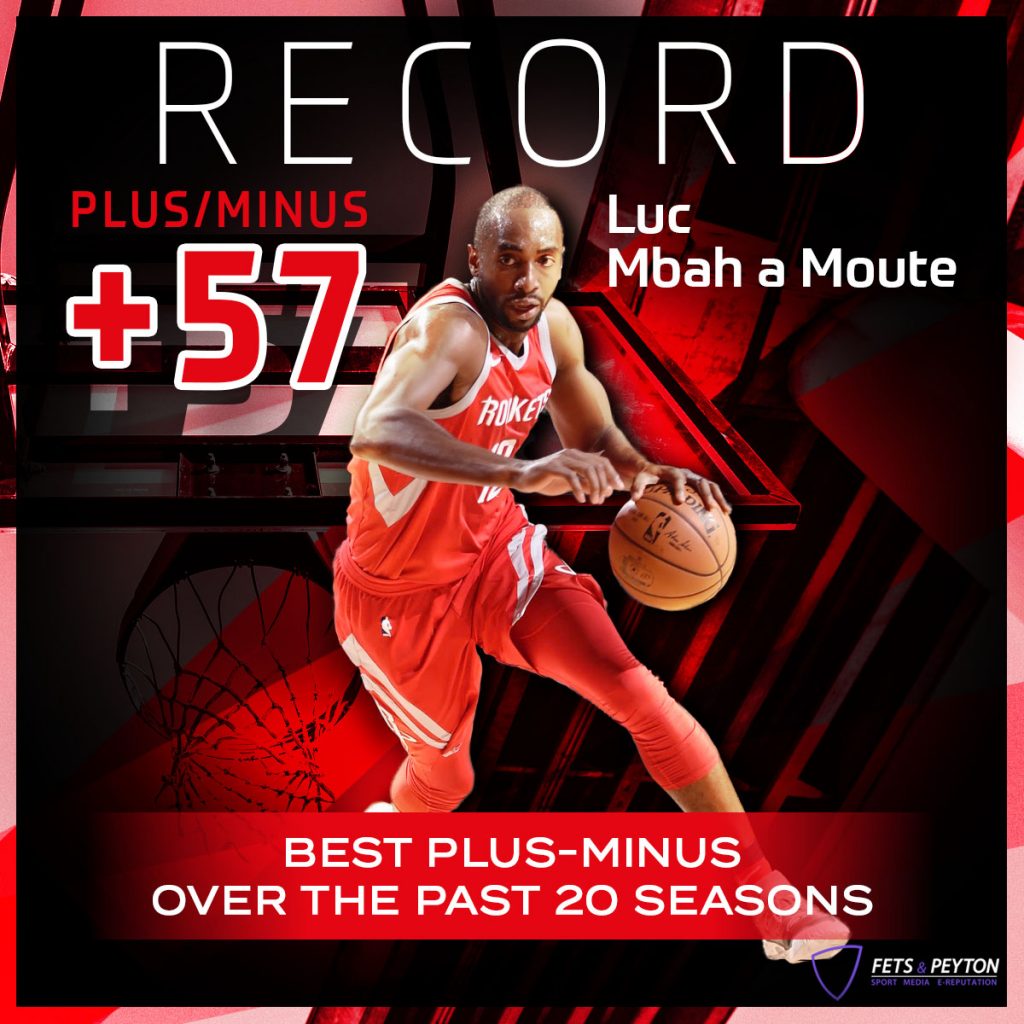 The Houston Rockets and ZTE Device are partnering to present their fifth straight Season of Giving.

In the first of three events taking place during the holidays, the #Rockets and ZTE hosted families from three local organizations for a night at the movies, and surprised them with a bag of Thanksgiving groceries & a gift card!

In the 1st of three events taking place during Season of Giving presented by @zteusa, the #Rockets & ZTE hosted families from three local organizations for a night at the movies, and surprised them with a bag of Thanksgiving groceries & a gift card! #RocketsGiveBack

In the 1st of three events taking place during Season of Giving presented by @zteusa, the #Rockets & ZTE hosted families from three local organizations for a night at the movies, and surprised them with a bag of Thanksgiving groceries & a gift card! #RocketsGiveBack pic.twitter.com/SWeRPhCBJ6

Another win against the Grizzlies 105-83

Memphis lead 18-17 in the 7th minute of play, but then the Rockets take the advantage to never let go again. Houston takes the first quarter 33-25 and widens the gap of 16 points in the second 48-32 before knowing a passage to empty which benefits the Grizzlies who chained a 17-4 and glue at 2 points 48-51. Eric Gordon scores 6 points on free throws and 3 points, which make it possible to win the 2nd quarter 26-25 and lead to the break 59-50.

The 3rd and 4th quarter time are one-way for the Rockets, who perfectly control the end of the game: 23-17 and 23-16 in really harmless Grizzlies tonight.

The Rockets signed tonight a huge performance at the Suns with a record in the key, that of the highest total points in the history of the franchise in a first half with 90 points! James Harden still scored an outstanding performance with 48 points, 2 rebounds and 7 assists (33 points to 9/12 in the first period). Chris Paul back 11 points, 4 rebounds and 10 assists. Ryan Anderson adds 24 points, 4 rebounds. Luc Mbah slightly sick Moute was left at rest for the meeting.

The offensive steamroller once again came into play in the first quarter, already 22 points ahead in 12 minutes 45-23. Phoenix scored more points in the second, but Houston totally masters his subject during a game where the baskets scroll. The Rockets sign a 45-42 in the second quarter and are ahead at break 90-65.

The second period is a formality. The Rockets pocket the 3rd quarter time 30-26 and can quietly control the end of the game (22-25). Final victory 142-116! The Rockets have recovered in the most beautiful ways after their poor performance at home against the Raptors (113-129).

Amazing Victory against the Pacers 118-95

As the day before, Houston starts very strong on a 24-9 in 5 minutes, punctuated by twice 3 points of Ariza and a 3 points of Gordon. The 3 points rain and Luc Mbah has Moute place his, which offers the first quarter-time Rockets 35-18. The Pacers return to 10 points early in the second quarter 29-39, take the period 33-28 but Houston remains firmly in the lead at halftime 51-63.

The Rockets are 1st in the West with 11 wins and 3 losses.

Victory against the Grizzlies 111-96

The Rockets took revenge on the Grizzlies, dominating the whole meeting. Luc Mbah a Moute was back after being spared on the previous match.
James Harden continues his festival with 38 points, 4 rebounds and 8 assists, Eric Gordon added 26 points, 2 rebounds, 2 assists.

The Rockets won at home against the Cavaliers, despite the absence of Luc Mbah Moute, spared due to a small gene left knee. Houston led the rebounds 45-26, and finished with a 46.8% shooting success against Cleveland’s 55.6%. James Harden (35 points, 11 rebounds, 13 assists) responded to LeBron James (33 points, 4 rebounds, 7 assists).

The Rockets have logically dominated the game on the Hawks’ floor (1 win for 8 losses), taking a 30-point lead with 28 assists at 16 and 16/47 at 3 points. Luc Mbah a Moute flamed during the match with 20 points, 4 rebounds and 2 assists. James Harden has 29 points, 3 rebounds and 11 assists. Eric Gordon adds 20 points, with 2 rebounds and 5 assists.

After pocketing the first quarter 36-25, Houston is already 18 points ahead at break 69-51 after winning the second quarter 33-26.
Atlanta will never come back in the game and the second half is a formality. Houston leads 97-76 at the start of the last quarter and controls the end of the game 22-28. The Rockets win 119-104.

.@mbahamoute was a huge spark off the bench last night with 20pts.

Head over to our Facebook page for more highlights from the win. pic.twitter.com/Z7dhBj6VT7

The Rockets are 1st in the West with 8 wins and 3 losses. Houston will receive Cleveland next Thursday (4 wins, 6 losses).

The Rockets dominated most of the game against the Knicks at Madison Square Garden. Luc Mbah a Moute had 10 points, 9 rebounds and 1 assist in 24’59, James Harden 31 points, 5 rebounds and 9 assists, Ryan Anderson 21 points and 3 rebounds.

After taking a 23-15 lead and leading the score in the first quarter 27-24, the Knicks were joined in the early second by the Rockets on two free throws by Ryan Anderson followed by a 3 PJ Tucker points. Houston leads 34-30 and will then create a big gap until the end of the game. The Rockets win the second quarter 36-21 and take a 12-point lead at break 60-48.

The Rockets are 2nd in the West with 6 wins and 3 losses.