Join me, the Luc Mbah A Moute Foundation and invited high-level guests, celebrities for an unforgettable weekend. Sports, Music and art into one grandiose weekend. For more information and sponsorship opportunities contact raoulkeddy@rakedinternational.com

Mbah-a-Mouteball: How the Rockets Chased Value to Challenge the Warriors

One of the many peculiar things about being a professional athlete is that your colleagues know exactly how much money you make.

In the 10 years that he’s been an NBA role player, Houston Rockets forward Luc Mbah a Moute has never been paid as much as his peers. He’s earned less in his entire career than James Harden earned this year alone. As a free agent last summer, he was on the open market longer than most players before he finally signed a one-year deal for the veteran’s minimum salary, the least that any NBA team could offer.

“Everybody could’ve gotten him,” Rockets coach Mike D’Antoni said, “and we did.”

He’s been so useful that it has since become clear Mbah a Moute was deeply misvalued by the league. To put it very simply, when he’s on the court, his team is better. And yet D’Antoni can’t fault other teams if they couldn’t understand why. “To be honest with you,” he said, “I didn’t know it, either.”

And what exactly was it that he didn’t know about Mbah a Moute?

“That he’s one of the best players in the league,” D’Antoni said. 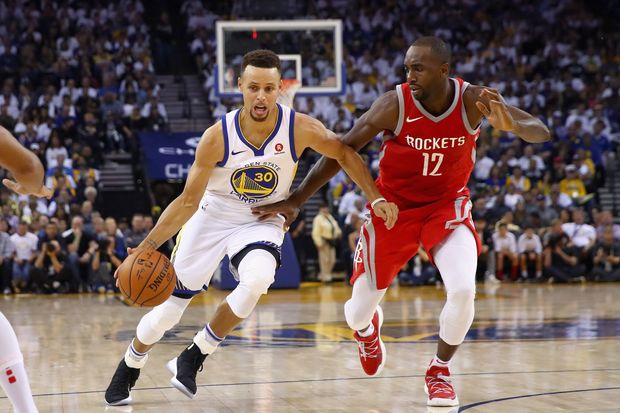 Stephen Curry trailed by none other than Luc Mbah a Moute. PHOTO: EZRA SHAW/GETTY IMAGES

The Rockets and Golden State Warriors have circled each other like sumo wrestlers all season long, and now they’re colliding in the Western Conference Finals, a series between dominant, intelligent, carefully built teams responsible for many of the stylistic innovations that have defined the modern NBA. The Warriors are the reigning champions eyeing a third title in four years. You may have heard something about them. But the Rockets were constructed specifically to beat the Warriors, and they established themselves as the biggest threat to their budding dynasty by winning the most games in the NBA this season. They became good enough that Golden State losing is at least theoretically possible now.

This is a matchup with valuable players, most valuable players like James Harden, Stephen Curry and Kevin Durant, and one player who is crucially valuable in his own quiet way: Luc Mbah a Moute.

Every decision in basketball is a reflection of what NBA teams value and why. Because they’re constrained by a salary cap from spending indiscriminately—this is not baseball—they have no choice but to find value in unexpected places. And they win championships by doing more with the same amount of money. The embarrassment of riches otherwise known as the Warriors, for example, only exist because Curry was on a bargain contract until this season, at which point Durant agreed to his own sweetheart discount.

But it has never been more imperative to chase value on the margins in this era of talent consolidation across the NBA. There is a premium on effective, affordable players, and stealing a niche player on a minimum deal can be as important as picking the right star player for a maximum salary.

Which is why every team would take a Luc Mbah a Moute. 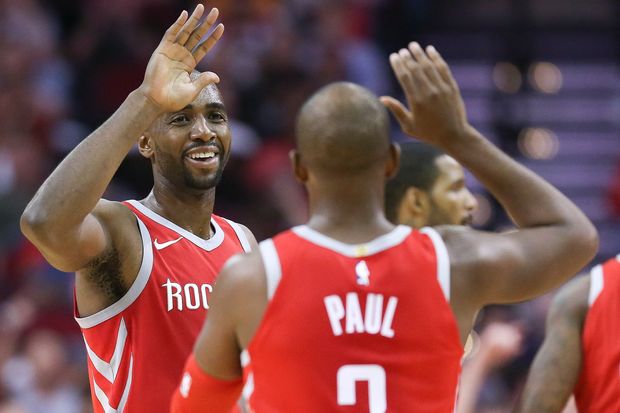 There was a simple reason the Rockets targeted Mbah a Moute, a 6-foot-8 forward who could guard anyone, after they paired James Harden with Chris Paul last summer. It was almost entirely because they were obsessed with the Warriors. They didn’t need to crunch the numbers to know they would probably have to play Golden State on their way to an NBA title—this being the Rockets, they crunched the numbers anyway—and that meant it wasn’t enough for them to merely improve. They had to improve in a way that increased their chances against the Warriors.

They were convinced that Mbah a Moute could help. Golden State’s small lineups feast on mismatches, but there is no team capable of starving them like the Rockets. And that’s by design. Houston can surround Harden and Paul with the versatile, interchangeable players required to switch on defense and survive against the Warriors—players like Mbah a Moute. In two games against Golden State, Mbah a Moute was positional silly putty. He defended Klay Thompson on 33 possessions, Durant for 23 possessions and Curry for 13 possessions, according to NBA tracking data. 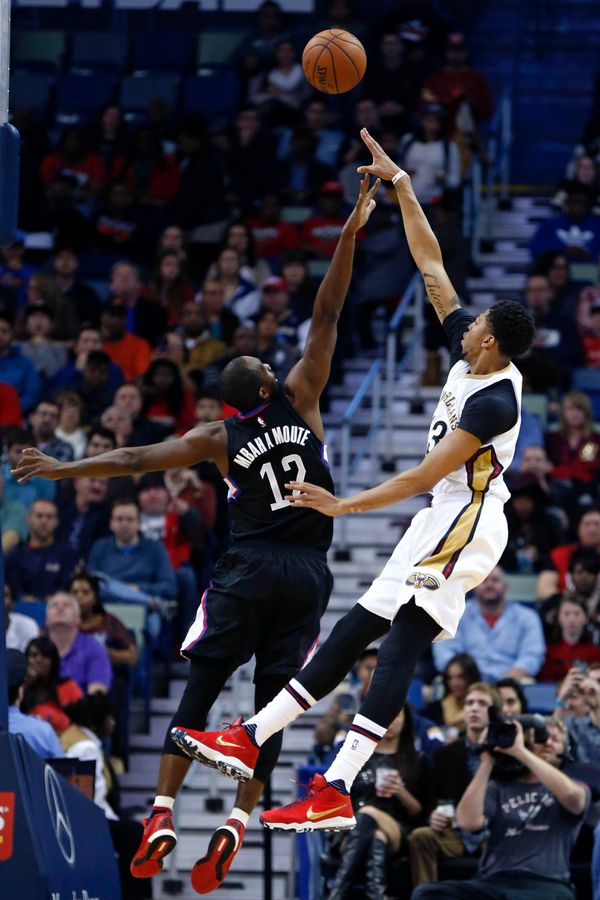 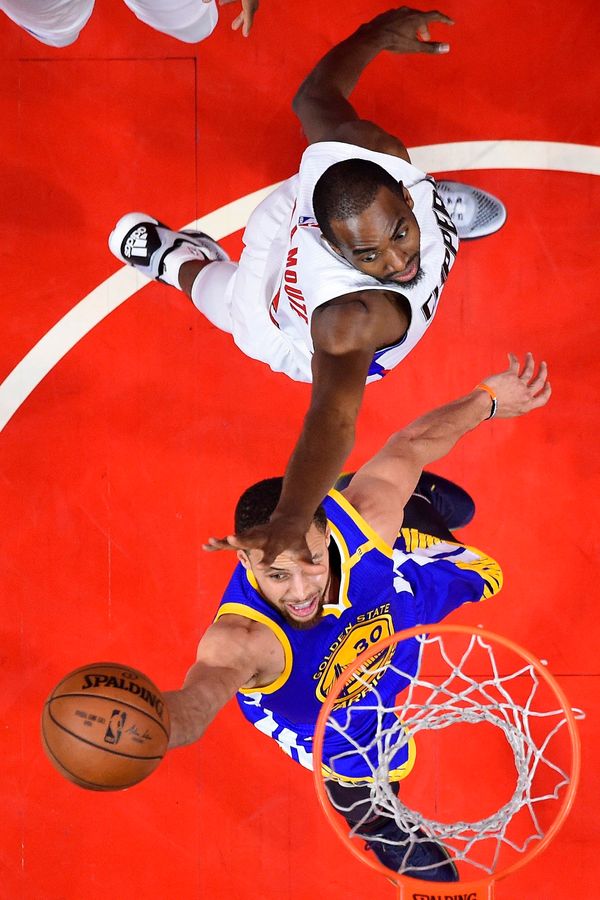 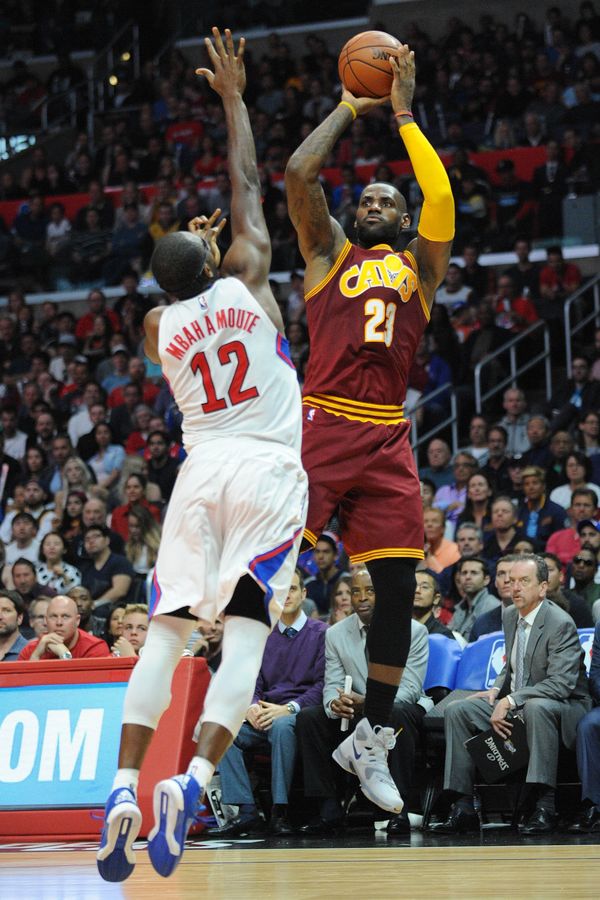 Mbah a Moute, a Cameroonian who went to UCLA and bounced around five teams in five years before this season, was secretly good at lots of little things for a long time until those very things made him valuable.

He moved the ball, spaced the floor and was perfectly happy to guard the other team’s leading scorer. But one reason he was overlooked is that he did not shoot. He was good at not shooting, but not shooting wasn’t an option in Houston, where he’s been encouraged to shoot more than ever. “People thought I wasn’t a good shooter,” said Mbah a Moute, who is shooting 36% on 3-pointers this year, “but it’s because I was never really in a position where I could shoot.”

Houston saw the potential in Mbah a Moute that other teams ignored. It was not an accident that he signed there when he could have signed anywhere. “No, no, no—that one we went after hard,” D’Antoni said.

Rockets executives were on the phone with Mbah a Moute and his agent every day until he agreed to a deal. As he called around the league, general manager Daryl Morey heard so much praise about Mbah a Moute from coaches, executives and former teammates like Paul that he actually got worried. “It was almost toomuch raving,” he said. “I was, like, it can’t all be this good. It’s been even better.”

Mbah a Moute felt the same way as the Rockets. He was a little baffled at how badly they wanted him, especially because they already had P.J. Tucker, another undervalued wing player they prioritized last off-season.

But what Houston realized was that it couldn’t have enough players like Tucker and Mbah a Moute.

“That made sense to me,” Mbah a Moute said. “I felt I could be a complementary piece of the puzzle.” 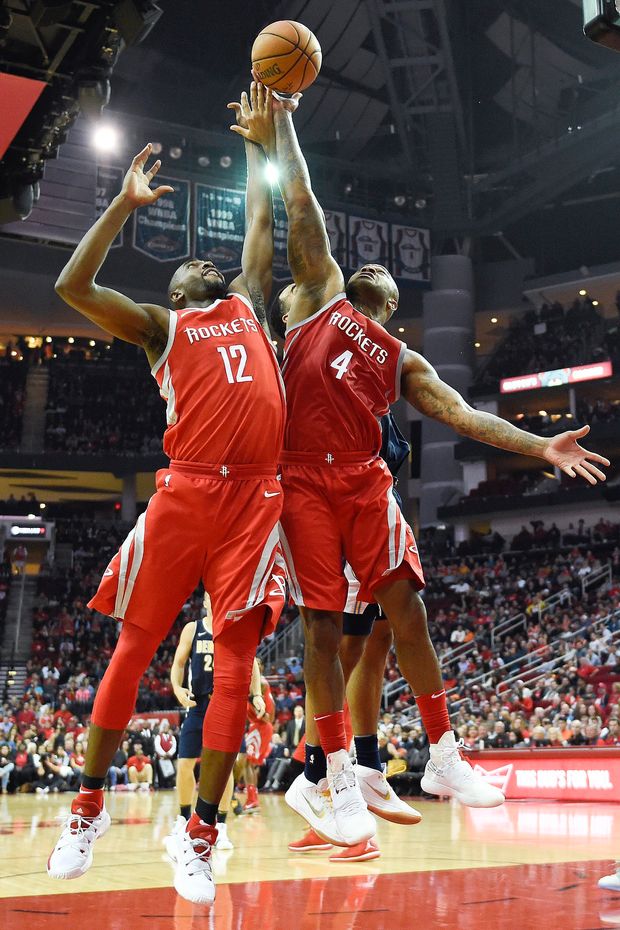 He was a positionless player before position became a dirty word, and when the game evolved, he took advantage of the ideas that have reshaped the league. Mbah a Moute was suddenly a market inefficiency. What he did was in high demand, and yet he was still available for cheap. That was all the incentive the Rockets needed to pursue him.

It worked out spectacularly well.

The Rockets set a franchise record for wins in a season. Their offense was more explosive than last year’s, when it was one of the most explosive of all-time. Their defense went from mediocre to elite under the influence of Paul, Tucker and Mbah a Moute, whose defensive rating was the lowest on the team.

He now finds himself in line for a richer contract because it turned out that D’Antoni calling him one of the league’s best players was positively D’Antonian: It may have sounded wrong, maybe even ridiculous, until it was right.

In fact, of the hundreds of player combinations that logged more than 1,000 minutes together, the Rockets had the single most productive two-man lineup in the NBA, a duo with a better net rating than even Stephen Curry and Kevin Durant.

This pair that annihilated other teams: the likely most valuable player James Harden and Luc Mbah a Moute.

The Rockets make it to the Finals Western Conference

Houston pocketed its 4th victory against the Jazz (112-102) and thus validated its ticket to the Western Final against Golden State Warriors. Back home, Houston fought to defeat Utah, who took advantage several times. But Chris Paul made an exceptional match (career record in the playoffs) with 41 points, 7 rebounds and 10 assists. Luc Mbah a Moute had 8 points, 2 rebounds, 2 assists in 20 minutes.

The Jazz returns in the third quarter with 32-21 on a run 20-7. At the start of the last quarter, Utah leads 78-75. In the last period, Chris Paul is everywhere and chained the points. O’Neale at 3 points is at 97-96, but Chris Paul is 10 points in a row 107-98, then Tucker (19 points, 6 rebounds, 2 assists) sends a 3 points to 35 seconds of the buzzer that gives 10 points ahead to Rockets 110-100. Sufficient to handle the last moments and qualify for the Western Conference final against the Warriors, with a first confrontation Monday, May 14.

Thanks to an iron defense, Houston had a third victory against Utah in the 4th game, and only has to validate his ticket for the Western Conference final in the 5th match tomorrow. The Rockets led the whole meeting, with the inevitable duo Paul-Harden at the helm. The Bearded finished with 24 points, 4 rebounds, 3 assists, and Chris Paul with 27 points, 12 rebounds and 6 assists. Clint Capela has 12 points, 15 rebounds and 2 assists.

The Rockets took the lead from the start, pocketing the first quarter time 30-23. The Rockets lead by a fortnight in the 2nd quarter, when Mitchell (25 points, 9 rebounds, 2 assists) connects the points and allows the Jazz to return to 51-46. But Harden and Paul meet and offer the period at Rockets 28-25 and the first half 58-48.

Houston takes a 19-point lead 76-57 in the third quarter won 21-17. The end of the match is a formality (21-22) even if Mitchell still him, sticks to 5 points. Houston reacts quickly and regains its lead. The Rockets have only one victory to win at home to pass the round.