His childhood in Cameroon

Luc was born in Yaoundé, Cameroon, on September 6th, 1986, with his twin brother, Emmanuel Bidias a Mouté, two of eight eventual children. Though raised in Yaoundé, a metropolitan city with over a million inhabitants, Luc and his family had close ties to the village of Bafia, where his father was a chieftain, and by extension, Luc was a prince. The Mbah a Moute clan would make the 20-minute drive to rural Cameroon whenever his father’s presence was needed, which was largely for ceremonies, celebrations and holidays.

Growing up in Cameroon, Luc – like most boys in his country – played soccer, but as a teenager, his brother Emmanuel learned about basketball. « [Emmanuel] went to a different school than I, » Luc explained, “and he would come home at night and I guess try to teach me how to play because he needed someone to play with. And my Dad, he saw we were into it and he started bring us DVDs, you know, a magazine of Michael Jordan and stuff like that. So that’s how I fell in love with the game.«

On a hoop attached to a street lamp, Luc taught himself the basics of basketball. His lanky frame was perfect for the sport, and with the relentless effort that would come to define him, he rapidly improved. Just two years after first touching the leather, Luc was playing on Cameroon’s national youth team. Not long after, he was chosen to travel to the NBA’s inaugural “Basketball Without Borders » camp in South Africa.“There [were] a lot of kids playing at the time, » said Luc. “I was just good enough to be selected to be one of those kids because of my work ethic. I got better real quick, and once I started playing, that was the only thing I did. Play all day and keep working. »

Fifteen-hundred miles across the continent, Luc learned the game from some of the NBA’s top African players.
Dikembe Mutumbo, who’d left the Democratic Republic of the Congo for a basketball career, took a shining to the young talent from Cameroon. Meeting Mutumbo, along with fellow Africans DeSagana Diop and Ruben Boumtje-Boumtje, showed Luc that dreams of a career in professional basketball were possible.

Within months, a whirlwind set of events took place, and Luc was headed to a high school in Florida to play basketball and pursue an education. The educational opportunities that Luc might have in the United States were ultimately what convinced his father that leaving was a good thing; at this point, playing professional basketball was more than a distant dream than anything else.

« Everyone thought I was a little crazy, everyone didn’t know what I was doing, » Luc remembered. “It wasn’t really until I got selected to go to that camp, when my brothers and sisters started realizing. ’hHe’s really serious about this basketball thing and he might be really good, too.’ I got back and said ‘by the way guys, I’m going to the United States in a couple of weeks. Everyone thought it was a joke, but my dad was convinced because I could go to school. Every time I tried to pursue basketball, he would insist I get a good education.«

« It was really exciting when I decided to leave, » he said, “but at the same time, the closer that day got, I got more sad. I was going to a new country, having to learn a new language, leaving my friends, leaving my family, everybody, everything behind, so it was kind of a bittersweet feeling.

His departure to the United States 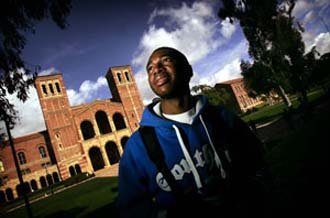 Luc enrolled in Montverde Academy, a tiny school nestled between two big lakes in the middle of southern Florida. His English was somewhat limited. « “All I knew, » he said, “was how to say ‘Good morning,’ ‘My name is Luc,’ and ‘Good night.’ That’s it. »«

The culture on the court was completely different too.  « “Coming from Cameroon, » said Luc, “we play that European style, very slow, very systematic. When we came here it was just run, run, run. Push the ball. I was just running and jumping. »

But as had been the case in Cameroon, Luc rapidly picked up the style of American basketball, too, earning a starting spot on the team by the time the season kicked off. Though he played well his first year, averaging 12 points a game, it wasn’t until he spent a full offseason playing AAU and pick-up basketball that he felt comfortable on the court.

Once he got comfortable, Luc was a force. He started all over the floor for the Montverde Eagles, even running the point at times for the team. He excelled in the diverse roles, leading the team in scoring (nearly19 ppg) and rebounds (8.3 rpg). That season, Montverde, in just the second of year of its program, finished 21-6. Despite being a Class 1A school, the smallest designation in Florida, they beat 6A Edgewater, who at the time was ranked first in the state.

It was as while he was dominating better competition that Luc caught the interest of UCLA coach Ben Howland. On a recruiting trip one summer afternoon, Howland noticed how relentless the Cameroonian was in the humid Florida heat, watching him practice for over two hours without slowing a bit.

“It was a very, very sunny and hot and humid afternoon in Florida, in the middle of July, and I had one of my better workouts, » Luc recalled. “We didn’t have air conditioning, so you would walk into the gym and you’d already be drenched, covered in sweat because it was so hot in there. I was used to it, because that’s what we did all summer. »

“I remember him looking at me like I was some kind of monster, » Luc said. “He was so impressed about how hard I went through that workout. »

The next day, Luc’s high school coach called him into his office. UCLA had offered him a scholarship.